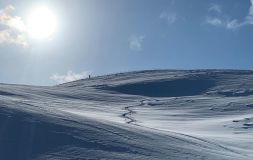 Andermatt, Switzerland, skiing above the clouds...

Saharan dust, summer snow in NZ, and powder in Scotland!

There's been some light to moderate snowfall over the first half of this week in the Alps, with many ski areas seeing another 10-30cm of snowfall. But the weekend was warmer with some lower resorts seeing rain at the base, snow higher up, at times. Things are changing now though with skies clearing, widespread sunshine and very low temperatures on the way for the weekend. Some will see lows on the slopes of -20C or colder.

Elsewhere in Europe Scotland's sensational season for snowfall continues - with the great irony that the country's ski areas are closed by the pandemic. In Eastern Europe temperatures have gone from 15 below freezing a few weeks ago to plus 15 and 'very spring-like' in Bulgaria.

After the huge west Coast snowfalls that began a fortnight ago, it has been a quieter week for snow in North America, though there have been some more moderate falls in the Rockies and further west. The main news from the East has been very cold temperatures, as low as 0F and sometimes lower.

Ski areas in Japan have reported yet more big snowfalls as the great winter 20-21 continues there. Most areas have already surpassed the snowfall totals from last winter.

There's also been fresh snow reported in the Andes and New Zealand with several ski areas in NZ noting that they received more snow in the unseasonably cold January - the first half of summer there - than they did last July, the first full month of their winter, last ski season.

Some decent snowfall likely for the northern and western Alps this weekend, but generally a lighter week for snow than of late. Cold temperatures will keep conditions good.

It's the USA and Japan looking good for new snow this week...

Europe
Austria
A fairly quiet week for snowfall in Austria with just some modest 5-15cm falls for most areas and some lovely sunny days when the clouds have been absent. Slopes remain quiet with only local people allowed to visit and most resorts have limited terrain open in response to the limited demand.

The big weather factor at the moment is the temperature, which is dipping about 20 degrees (C) from last weekend when some areas saw rain at resort level.

If (and a big if) pandemic restrictions ease enough by the late spring, summer skiing possibilities look good with the four deepest Austrian bases all on glaciers; Hintertux, Kaunertal, Pitztal and the Stubai all have more than 3 metres (10 feet) of snow lying now.

France
The French Alps have great snow cover at the moment, with several resorts reporting upper slope base depths at or near three-metre (10 feet). Most resorts are open but the French government are keeping lifts closed through February so it is ski tourers and cross country skiers out on the slopes. though advised to be wary with the avalanche danger still high.

If Italian resorts do open next week (which looks likely at the time of writing), it will leave France as the only leading ski nation keeping its lifts closed. But, looking for an upside, all the snow does mean that if areas do open at easter there should still be plenty then.

Recent weather has been snowy once more for many areas, although with much smaller accumulations than last week. It is looking cold, dry and sunny into the weekend.

Italy
Italy is the focus of world attention at the moment, at least in terms of ski racing, with the Alpine Skiing World Championships 2021, the biggest event in ski racing outside the Olympics, underway in Cortina. Alas the first three days have been lost to inclement weather (snowfall, avalanche danger, fog), but hopefully things will get on track for the remainder.

At the time of writing most Italian ski resorts are hoping to be able to open for the ski season at last, on Monday, although we know of course that things can change at very short notice. Only the South Tyrol is currently banned still from having its areas open, due to higher virus levels there.

If Italian skiers can get on the slopes next week though they should be able to find great conditions almost everywhere. There was some fresh snow at the start of the week, enough to lead to the postponement of opening races at the world championships in fact, but now its cold and sunny so it will be glorious on Italian pistes if they do indeed finally open.

Switzerland
Swiss ski areas continue to operate with greatly reduced numbers due to travel restrictions, and resorts here are suffering as a result.

In terms of the snowfall and weather, there's been a little more at the start of this week with ski areas in the east of the country posting up to 20cm accumulations on Sunday/Monday, but since then it has been largely dry.

Andermatt had been the first ski area in the world this season to post a 5-metre base depth but that has now gone back down to 4.7 metres - still the (joint) deepest in the world, just ahead of resorts in Japan and the NW USA. Temperatures, which had been rather warm, are also plummeting, as the skies clear with temperatures as low as -20C forecast by the weekend.

Some Swiss resorts have been posting images of dusty orange snowfall and light due to a cloud of dust from the Sahara that has blown in.

Scandinavia
After the frequently snowy January dramatically improved conditions in Scandinavia, February has seen the weather getting very cold and dry. The upside of this has been plenty of glorious sunshine just as the daylight hours are increasing as we move towards springtime. The downside is little fresh powder, although with temperatures typically 10-20 degrees below freezing the snow that has fallen is holding its dry, powdery quality much better than the freeze-thaw conditions more common in the Alps.

Pandemic numbers are low, particularly in Norway and Finland, albeit with travel strictly restricted, so for those lucky enough to be able to get on the slopes it's looking good at present with most centres more-or-less fully open with good snow depth on all runs.

Pyrenees
The strange season in the Pyrenees continues.

Around a quarter of the region's ski areas are open including two of the biggest, GrandValira in Andorra and Baqueira Beret in Spain, but the ski lifts in France remain closed and many Spanish ski areas haven't opened either because of pandemic restrictions or because they don't think it is worth opening. Those that are open typically have between 20 and 50% of their terrain open to try to keep operating costs down with the limited demand.

Grandvalira has the most reported open - 74km - about a third of its full area. The weather has got colder with fresh snowfall (10-20cm) in the first half of this week. Drier again now with sunny weather expected to return at the weekend. 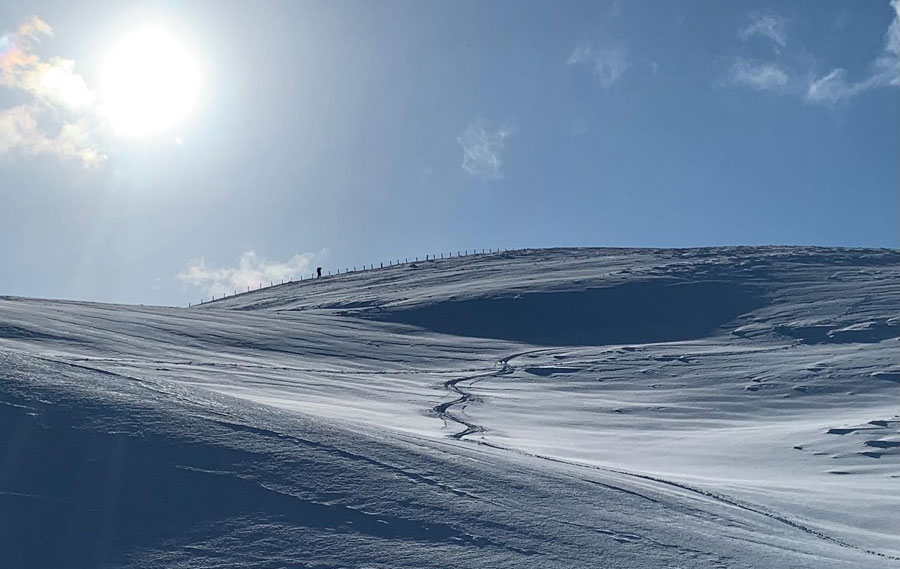 Powder in the Pentland Hills, for locals only and you'll have to hike... but it'll be so worth it... picture (c) Bryan Hogg

Scottish ski centres have been making mainstream news this past week as broadcasters cotton on to the fact that the country is seeing its best snow conditions in more than a decade, whilst centres remain closed by the Scottish Government due to the pandemic.

Cairngorm posted pictures at the weekend of a trail groomer ploughing the closed access road and drifts around the base building reaching two-metres. It's the same at the country's other four centres.

There's no word when access may be allowed again but it seems unlikely before March. The good news is that the snow should last well into spring now, weather permitting.

Eastern Europe
Warmth - not the best weather for skiers - has been the order of the day in South-Eastern Europe with Bansko in Bulgaria seeing temperatures hit plus 15C in the resort at the weekend and +8C at the top of the mountain. Fortunately, the cold and snowy January weather means it has a good base to draw on and temperatures have been falling since the Saturday high and should be sub-zero by this coming weekend with more fresh snow in the forecast.

More countries are re-opening their slopes with the Czech Republic and Poland expected to allow skiers back this weekend.

North America
Canada
Very snowy and very cold sums up the weather in Western Canada over the past week. Apex was among the resorts reporting more than a metre of snowfall in five days over the weekend whilst Sunshine ski area near Banff was forced to close on Monday as temperatures were deemed too low for safe operation during the pandemic.

Over in the East of the country its been cold in Quebec too. Here it has been a dry winter to date and bases are thin but snowmaking systems can at least operate full blast in the low temps.

USA
After the huge snowfalls in the West a week ago and some hefty dumps in the east too things have been quieter for most areas this week. In the east, as in Canada, the cold weather has been a big issue. Otherwise, conditions are the best they've been all season with fresh snow and everything open.

The Rockies, at least the southern Rockies, aren't having a great snowfall season but there was excitement with some fresh snow and powder skiing at the weekend. The biggest falls of the last seven days were up in the Northwest corner though where Mount Baker hit a 4.7-metre base after several feet more snowfall since the weekend. That equals the deepest in the world published by Andermatt in Switzerland.
The Admin Man 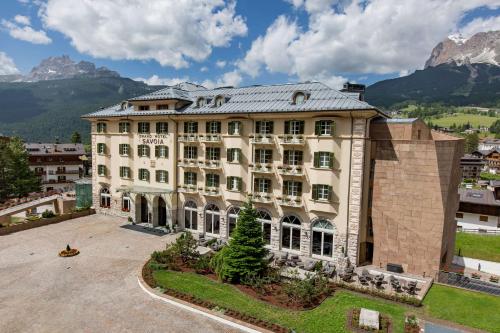 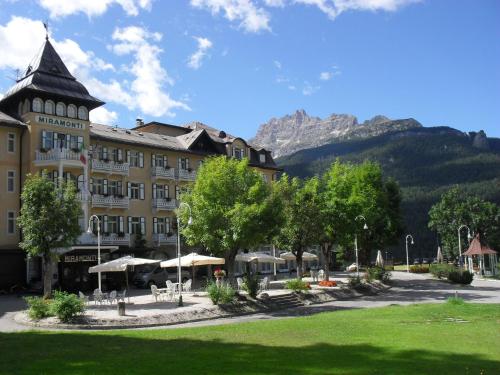 There is snow forecast to fall in Italy over the next 2 days, in at least 8 Ski Resorts including Gambarie d'Aspromonte, Lorica, Montagna Grande di Viggiano, Pescocostanzo and Roccaraso.

At least 1 Italian Ski Areas is reported to be open.