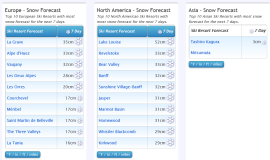 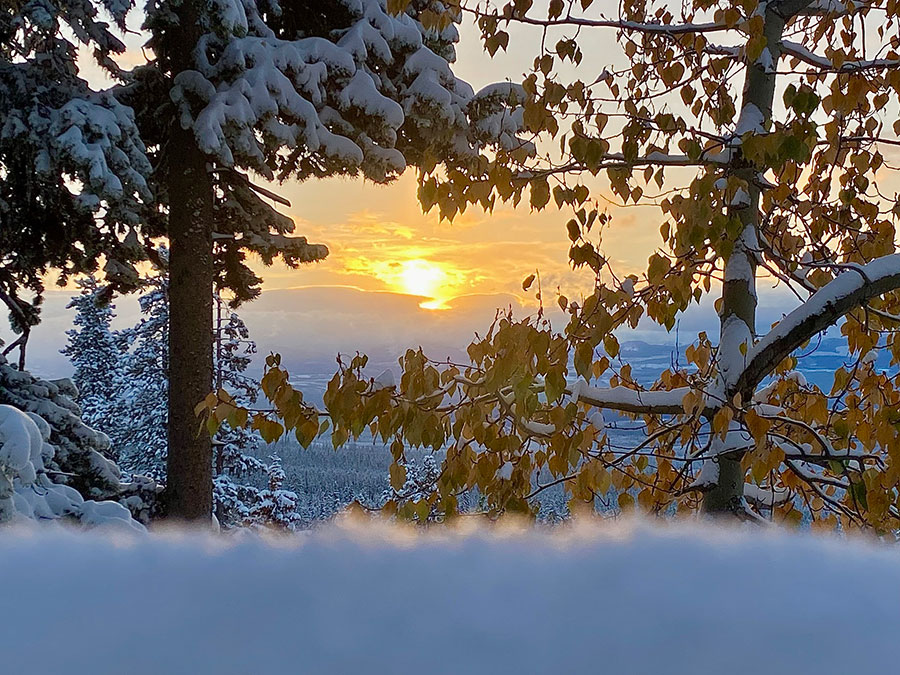 First snows on the autumn leaves in Big White, Canada...

More early snow in Canada, US and Japan.

The Snow Headlines - 27th October
- Up to 25" (63cm) of snowfall was reported in the USA
- The 2022 season ends in the southern hemisphere.
- Colorado's 22-23 ski season gets started.
- 22-23 FIS World Cup Alpine and Big Air tours get underway.
- Sweden's 22-23 season is underway this weekend.
- Snow in Japan and the Himalayas. Japan's season is underway.
- St. Moritz ski season is expected to start on Saturday. 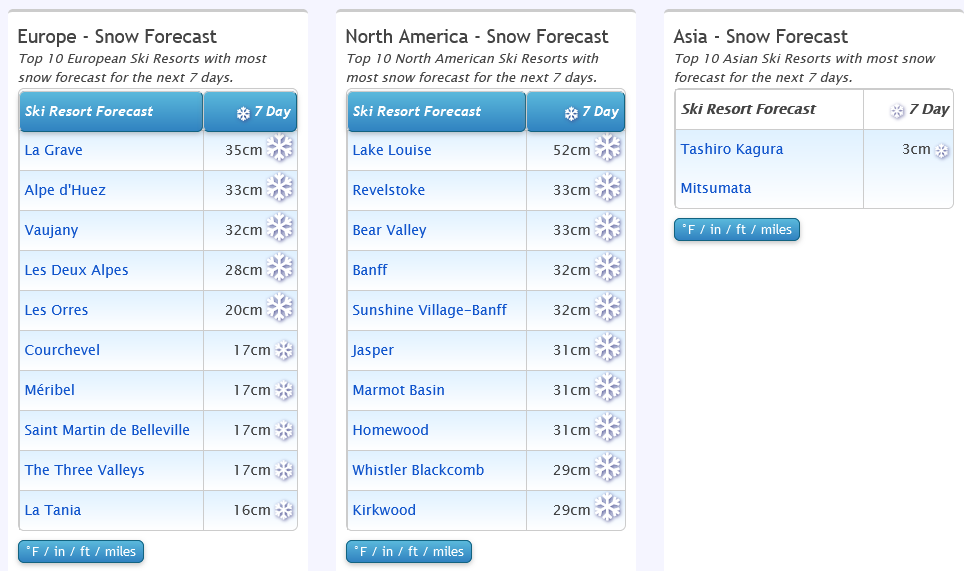 See where it's going to snow next week...

World Overview
North America has stolen the snow headlines this week with over two feet of pre-season snowfall reported on the western side of the continent with ski areas in Alberta, Montana, Utah, inland BC and Wyoming posting the biggest falls, but with everywhere seeing to get at least a dusting... and some snow for the east too.

Colorado's season also got underway with the first centre open.

It's a very different picture in Europe, with warm temperatures at high altitudes bringing rain rather than snowfall (although there was a bit up high) to glaciers meaning Zermatt/Cervinia joins Les 2 Alpes in cancelling planned World Cup events over the next few weekends.

In the wider world, there's been snow reported at Indian Himalayan resorts and across Japan's ski slopes. The Japanese season has started with a small area at the base of Mt Fuji opening a run thanks to extensive snowmaking.

In the southern hemisphere, the last slopes open closed for 2022 on Sunday although Mt Hutt still has a terrain park open.

Solden, which has the second-most terrain open, hosted the FIS 22-23 season World Cup opener on Sunday, with a men's GS race, after the women's race had to be cancelled on Saturday due to rain, snow and low visibility on the glacier.

Four other centres are open – the Stubai, Pitztal, Kaunertal and Kitzsteinhorn glaciers – and they had a little fresh snow at the weekend too, although it is now dry and sunny again. Bases remain thin and terrain open limited but many have terrain parks in action already.

Kitzbuhel had been opening in October using snow farming for the past few seasons in order to claim a 200-day season through to May, but that plan seems to have been dropped this winter.

France
France is the only major European ski nation without any centres open so far after Les 2 Alpes and Tignes decided to delay their openings planned this month because of inadequate snow cover on their glaciers.

Tignes say they'll open if there's a big snowfall (no sign of that at present still) so it may be Val Thorens opening in just over three weeks' time that ends up first in France. There was a little snowfall up high thanks to the weekend storms here too.

Italy
Italy's two open centres continue to be Passo Stelvio and Val Senales and it's also possible to take a lift up to the glacier slopes above Zermatt from Cervinia.

Passo Stelvio, which first opened for its 2022 summer ski season last May, is expected to close for the year in the next week or so. Val Senales is just getting started though. Both have just a few kilometres of runs and a very thin snowpack.

In common with the rest of Europe, the weather has been warmer than average for late October up on glaciers and it's looking dry for the week ahead but also thankfully cooler.

Cortina announced back in September they hoped to open some terrain late in October but that now looks 'off' after the mostly warm and dry October.

Switzerland
Four planned downhill World Cup races over the next two weekends, on a first-ever cross-border race course, from Europe's highest lift-served slopes above Zermatt over to Cervinia in Italy have had to be cancelled.

Zermatt said two days of rain even at these high elevations on their previously year-round ski slopes meant the events had to be cancelled, although they're now planning for 2023. The centre is still open to recreational skiers as are nearby Saas-Fee and also Engelberg.

The Diavolezza glacier slopes near St Moritz are also due to open this weekend but it looks like plans to open the Gemsstock slopes above Andermatt won't happen this weekend as originally hoped due to the recent warm and mostly dry weather.

Scandinavia
Sweden's Idre Fjäll and Kåbdalis are the latest in Scandinavia to open, using snow farming. But it feels much more like winter at these more northerly latitudes, and these centres, as well as already-open Levi and Ruka in Finland, are taking advantage of low temperatures to make fresh snow on top of the snow they'd stockpiled through last winter.

Norway's Galdhopiggen glacier is also open still but the summer ski centre is expected to close its 2022 run which began last spring within the next few weeks.

North America
Canada
Canada had a good week with a return to winter in the West and some of the first significant snowfalls on higher slopes in the East at centres like Mont Tremblant.

The snowfall in the west brought 15-30cm of snowfall down to base levels at many resorts in the BC interior and Alberta. So centres like Big White, Revelstoke and Sun Peaks all posted very snowy images, as did Sunshine in Alberta.

Sunshine is due to open for the season in a fortnight's time but Lake Louise could be even earlier, hoping to open a week on Friday, November 4th.

USA
The US has had a good week with snowfall first in the East on high slopes before last weekend, followed by more significant snowfall on slopes right across the west of the country.

The biggest falls – with up to 25 inches reported – were at resorts including Alta, Solitude and Big Sky.

Skiers and boarders were reported to be hiking up to ski down at these as yet unopen resorts.

One Colorado centre did open on Sunday though, Arapahoe Basin, more thanks to its snowmaking efforts than the fresh snowfall, although Colorado got some and is getting more (Aspen and Crested Butte both reported 13" accumulated by Thursday).

Keystone has announced it is opening Friday and nearby Loveland is expected (though not yet confirmed) to open this weekend.

The snowfall continued over to the west coast with resorts like Heavenly and Mammoth reporting their first dustings of the season.